Anyone remember a moment in life when, perhaps as a child, we were asked about an event and tried to skirt around the details of what happened? Perhaps, we did something that a parent or caregiver suspected was a poor choice? Anyone remember saying, “Somebody said it was okay to do (whatever)?” And, then, we were asked: “Who said it was okay?” And, perhaps we looked away and tried to avoid saying who that somebody was… Maybe we wanted to protect that somebody. Maybe no one actually did say anything – maybe we just wanted our actions to be okay, permissible, all right. Maybe we began to wonder about the choice that we made…

This recollection and a squeamish feeling passed through me yesterday as I watched the Israeli Prime Minister, Benjamin Netanyahu, in a TV interview regarding all of the civilian deaths in Gaza, Palestine. He is quoted as saying:

“I’m very sad. When I see that I’m very sad. We’re sad for every civilian casualty. They’re not intended. This is the difference between us. The Hamas deliberately targets civilians and deliberately hides behind civilians.  They imbed their rocketeers, their rocket caches, their other weaponry, which they use to fire on us in civilian areas… What choice do we have?…

All civilian casualties are unintended by us but actually intended by Hamas. They want to pile up as many civilian dead as they can because somebody said, and I mean, it’s gruesome, but they use telegenically-dead Palestinians for their cause. They want– the more dead the better.” (Click here and here for more text and here for a clip of the original CNN interview.) (I have bolded the “somebody said” text.)

I had heard the same clip on CBC Radio in the afternoon. Then, in the evening I watched the interview clip on CBC’s TV programme, The National. Yes, Netanyahu’s eyes shift up to the right and down to the left as he searches for words and lands on, “somebody said”. “Who” exactly said that, Mr. Netanyahu?

I’ve just spent a few days in the backcountry of the Canadian Rocky Mountains. I was ‘unplugged’ from electronic media and am grateful for that respite. With some family members, in addition to experiencing incredibly beautiful views and company, I had the honour of meeting a Calgary author, Nancy M. Hayes, and her husband, Ross E. Hayes. She gifted us with a copy of her 2013 book, Weaving Threads: Travels on the Silk Road (click here and here). Now, I return to my electronic Inbox and feel bombarded by terrible news, worldwide. However, as I read her book, this observation resonates. Nancy asks: “Forty years have given me time to think about what’s happened in Iran. Would world politics have taken a different course if people like me had spoken up and had tried harder to find answers to our questions?” (Hayes, 2013, p. 75)

Hmmm. Yes, I am a person like Nancy, insofar as we are western Canadians who hike. And, it’s time to start speaking up again. I’m wondering how to start. Also, yesterday, a friend asked me, “What is happening with the Ecumenical Accompaniment Programme in Palestine and Israel (EAPPI, click here and here), amid the terrible news in Palestine and Israel?” And another friend sent me a care-filled email, after seeing me across the room at our spiritual gathering (click here) and observing how sad I looked. Yes, I was feeling the weight of the suffering of the peoples in Palestine and Israel and feeling sad about news about friends who are now living with cancer.

Okay. I am choosing to speak up by asking again, “who” exactly said that Hamas ‘wants’ its people dead?

And, wait a minute – other parts of yesterday’s news reported that an Israeli soldier may have been “kidnapped”… Wait, wait… If a soldier is participating in a military incursion and if s/he is captured, would that person not be a prisoner of war (a POW) rather than a kidnapping ‘victim’? For more on this, click here and here. Let’s think about word choice in journalistic media and social media.

And, how big is Gaza, anyway? 360 square km. Smaller than the western Canadian city of Edmonton (684 square km). With news that the Israeli army seeks to push 3 km into Gaza (see here), imagine how Palestinians in Gaza may have fewer and fewer places to hide from the attacks? The Israeli forces warn civilians to evacuate but where can they go?

What can we do? Think about the words being used and what is happening – people are suffering and dying due to violence. Seek information from many sources. Ask questions. Seek direct answers, by persisting… 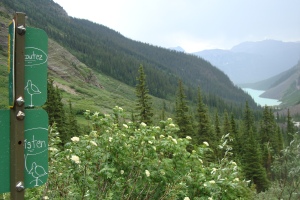 “Somebody”? Really? And are “some bodies” simply dying? We can choose our words to demonstrate that no one is just “somebody”. Each of us is a person and has a responsibility to care for life and to choose our words and our actions. As I return from the backcountry, I am ready again to choose a path…and I choose to walk and work toward non-violence and peace.