Eric Yellin, from Other Voice (click here), shared this thought with us, the Ecumenical Accompaniers of Group 38, on 26 January 2011. We were on a bus during our midterm orientation, touring the Israeli community of Sderot. From the outskirts of Sderot, you can see the Gaza Strip, one of the Palestinian territories controlled by Israel. Ronni Keidar, an Other-Voice member who lives in an Israeli community located immediately beside Gaza, also joined us on that sunny day in January. 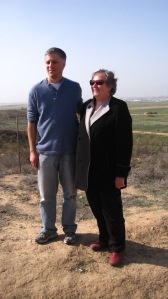 As Eric said, Sderot has become one of the most protected towns in the whole world with its shelters and shielded buildings. Constructing all of these ‘safe’ places is a very expensive venture. The bus stops are specially built to serve as shelters from rockets; steel shields are being built over school buildings; and safe rooms are being added to apartment buildings.

The sign on this playground rocket shelter (in the shape of a caterpillar) reads: “When you hear the ‘colour red’ go into the safe space beyond the orange line”. 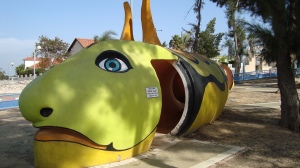 According to the Other-Voice website, this is a non-partisan, grassroots group seeking “a civil solution in the Sderot-Gaza region”. They have “no political aspirations. We are citizens of the Sderot region and the Gaza region. We are interested in finding creative ways of hearing a new voice from the region and for promoting hope and non-violent actions for the benefit of the locals who live here in Sderot and in the Gaza Strip” (Click here).

To me, Other-Voice members seem to be trying to maintain a human connection, regardless of the political ‘chess games’ being played in their midst. What if for a day or a week or two weeks, we, the people who live on this planet, agreed to sit down and talk with one another? Not as politicians, but as people. What if the ugly turnstiles in the Israeli Separation Wall/Barrier between Israel and the West Bank and the gates at the crossings between Israel and the Gaza Strip were suddenly swung open? What if the fishing boats of Gaza were free to come and go in the Mediterranean waters and ordinary citizens from across the water and around the globe were free to visit?

What if the money spent on the appearance of security were re-directed to supporting clean water, sanitation, and holistic diets…that would support child, youth, and lifelong health?

If you are interested in the current efforts of global citizens, including Canadians, who are seeking to end the Israeli occupation of Palestine and who are standing for a just peace in the shape of Freedom Flotilla II – Stay Human, be sure to watch the following website over the next few days (click here) regarding the Canadian Boat to Gaza, The Tahrir (Arabic for “liberation”).

Some of you may have heard Michael Enright’s recent interview (19 June 2011) with Amira Hass on CBC Radio (clicke here). As described at that CBC Radio webpage, Amira Hass “is the only Jewish Israeli reporting from the occupied territories. She is a correspondent for the Israeli newspaper Haaretz.” Recall my recent postings about access to water – Amira Hass comments on this issue early in the CBC interview.

Amira Hass is one of the global citizens travelling on the Canadian Boat to Gaza, The Tahrir. For some of her recent postings from Greece, click here.

Recent articles by Amira Hass include:

Here is a link to another recent interview with Amira Hass (29 June 2011) – click here.

4 thoughts on ““If money were used for peace, things might be better.””