This posting is the second in a series regarding the water and sanitation crisis in the Israeli government’s occupation of the Palestinian territories, particularly East Jerusalem and the West Bank. For more information about this crisis, click here.

JERUSALEM (Reuters) – “Israeli troops Sunday shot and killed a Palestinian who approached them at a West Bank checkpoint holding a glass bottle…” (for the full article, click here) 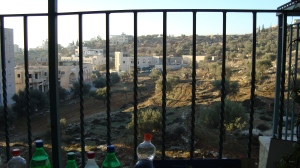 This is the kind of news headline that is familiar. This is “direct violence”. Yet, this news story from the 2 January 2011 has stuck with me because of the image of the young man carrying a bottle…what was in that bottle? Bottles are everywhere in East Jerusalem and the West Bank, particularly plastic bottles that have been thrown away. Recycling and garbage removal in East Jerusalem is a service only provided to some parts of that society. On the other hand, re-use in East Jerusalem and the West Bank is evident in containers of every size storing water… And here is the link to this image of the young man with the bottle…That bottle brings to mind another type of violence, “structural violence”.

Jean Zaru is the Presiding Clerk of the Friends Meeting House in Ramallah and a founding member of Sabeel, the Ecumenical Palestine Liberation Theology Center in Jerusalem. She writes that:

“Structural violence is silent. It does not show. Television captures the direct violence and most often the violence of the powerless and the hopeless, and it is headlined as terror. One basic weakness in most conceptualizations of violence in the Israeli-Palestinian conflict is the basic assumption of symmetry, which views contending parties in conflict as being equal.” But, as she observes, “the conflict is there because we are unequal. We are unequal in access to power, media, and influence. But we insist that we are not unequal in our rights.” (Zaru, 2008, p. 62)

Jean Zaru is calling out to the world, as are many other Palestinians and Israelis who are working toward ending the Israeli occupation of Palestine, with examples of this imbalance. One such example is the environmental structural violence around water.

Early in our orientation as the 25 Ecumenical Accompaniers of Group 38, we were introduced to George Rishmawi. He is Palestinian, the Advocacy Officer with the Near East Council of Churches, and a member of the EWASH – Emergency Water and Sanitation Hygiene – Advocacy Task Force (click here). EWASH has 31 international and local groups responding to the water and sanitation crisis in the occupied Palestinian territories. Rishmawi described to us that water is THE issue at the moment – it is a “tool of pressure” in the occupation, for as he said, being surrounded “by a wall, in a cage, without water, will kill a person”. 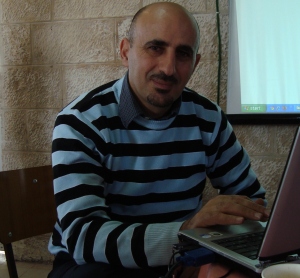 In Palestine and Israel, there are four aquifers and they are being damaged:

“The coastal – down by Gaza. The northeastern, western and eastern are commonly referred to as the Mountain Aquifer. The main surface water resource is the Jordan river – starting in Lebanon – with rivers from Syria (Yarmouk) and Jordan (Zarqa) feeding into it. The Jordan River has been heavily abstracted upstream by Israel.” 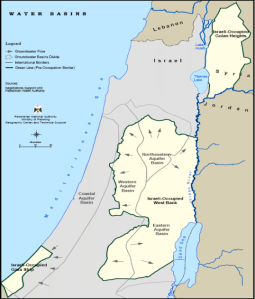 Rishmawi described to us that Lake Hula used to serve as a natural filter of these rivers into the Sea of Galilee (Tiberias Lake). But Lake Hula has shrunk considerably as a result of water-intensive agriculture and military (nuclear) purposes in Israel. 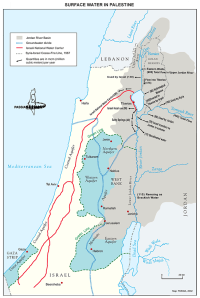 On this next map, the red line outlines the National Water Carrier drawing water from the Jordan River into Israel. Before 1948, over one billion cubic metres of water flowed per year in the River Jordan. Post 1948, only 40 million cubic metres of water flow and it also carries sewage and discharge from fish farms. The Sea of Galilee is shrinking in size. The Dead Sea is also shrinking and, as a result, has split into a number of smaller lakes. In addition, surface evaporation is an issue for the Dead Sea: 25 mm/24 hrs (Shehadeh, 2008, p. 122).

According to George Rishmawi, in 1967 when Israel occupied East Jerusalem, the West Bank, and Gaza, “Israel secured control over all the ground water resources and issued military orders relating to water. For example: Military Order 98 (August 1967) transferred all authority over water resources to Israeli Military Command.” Permits were then required for developing water resources and infrastructure…including drilling wells and maintaining springs, cisterns, networks and reservoirs.

Further, “in 1982, then-Minister of Defence Ariel Sharon transferred all West Bank water supply systems to the Israeli national water company, Mekorot, for the symbolic price of one Israeli shekel.”

“I see a beautiful view when I wake up in the early morning. When the sun rises, from my roof I see the Dead sea, gleaming in the dawn. And when the sun rises opposite the settlement of Maale Adumim – an Israeli settlement – I see it like a crocodile.

And as I watch the sun rise, I say that maybe there will be a promise of a better tomorrow, and when I see the Wall, winding around us, I feel an acute pain, and I liken our life to a wrapped-around tin of sardines, and I think of the future of the young people. Will they find a tomorrow without tragedy and pain and siege, and will they be depressed?

And this is the tragedy of the Palestinian people. Although I live in a place with a stunning view, the Wall spoils its beauty.

Can you see how this is painful?

Can you see the pain that the Palestinian people live in?

What tomorrow will our children find?”

This posting, “Thirsting for Peace – Environmental Structural Violence – Water”, and the previous and the next postings on this blog are drawn from a spiritual gathering on 1 May 2011 at Southminster-Steinhauer United Church, Edmonton, Alberta, Canada. For an audio version of this series of postings, please click here.