I heard the word, apartheid, in late April 2009 in Bethlehem. The Rev. Dr. Mitri Raheb used it during a conversation that he had with a group of 22 of us from Canada. One of us had asked him for his opinion about the conflict. I remember him saying that in the immediacy of the Lutheran ministry in Bethlehem, he was encouraged for the tremendous international support for the ministry. We were meeting in the beautiful space of the International Center of Bethlehem, Dar Annadwa Addawliyya ( دار الندوة الدولية‎). But he said, in terms of the bigger picture, ‘we are on our way to fully formed apartheid’.

I remember that moment as though I did a physical, mental, and emotional double-take. What? On the last day of that trip, the experience at the Qalandia checkpoint on the north side of East Jerusalem with Machsom Watch was a second shock to the system. A few of us witnessed the cattle-like processing of Palestinians through cages as they attempted to move from the West Bank to work, to school, and to hospitals in East Jerusalem.

Upon returning home in May 2009, I was moved to apply to EAPPI. And so, here I am. I’ve been here for ten days. 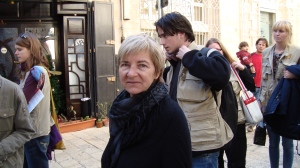 Today, on a tour with Angela Godfrey-Goldstein from the Israeli Committee Against House Demolitions (ICAHD), my mind and soul shuddered awake again… She explained that the word, apartheid, is Afrikaans for “separation” or “apartness”.

Also, this week, the members of EAPPI Group 38 were invited to Bethlehem to join an international delegation of women and local Heads of Church  to mark the one-year anniversary of the release of the Kairos Palestine document. People spoke in hope, in faith, and in love that next year, on the second anniversary, we will be closer to peace. Rev. Dr. Mitri Raheb, one of the authors of the document, moderated the panel discussion.

And so the circle comes around. Apartheid. Separation.

Now, I find myself here with 24 other EAs from around the world, to offer protective presence to vulnerable communities, to monitor and report human rights abuses, and to support Palestinians and Israelis working together for peace. Now and when we return home, we will campaign for a just and peaceful resolution to the conflict through an end to the occupation, respect for international law, and implementation of UN resolutions. Angela Godfrey-Goldstein began her tour with these words about this apartheid state: “It will change only when ordinary people understand what is going on.” Our political leaders need to hear from us.

I will write more on all of this in the coming weeks and months…from the City of Peace.

4 thoughts on “It is happening again. Apartheid. Separation.”

Leave a Reply to Marilyn and Peter Cancel reply